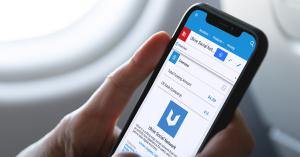 Uhive is now a top 500 tech company on Crunchbase

Uhive, a new social network powered by its own digital currency just ranked in the top 500 tech companies in the world.

LONDON, UNITED KINGDOM, September 18, 2019 /EINPresswire.com/ — Uhive, a new disruptive social network built on the foundation of human psychology, driven by an AI brain, and powered by a blockchain-based digital currency has just been ranked as one of the top 500 tech companies in the world by Crunchbase. Crunchbase is the leading platform for insights on 675,000 tech companies from early-stage startups to the Fortune 1000, and has over 50 million users including investors, entrepreneurs and journalists.

Uhive currently ranked at 494, is in the company of organizations like Buzzfeed, which is ranked at 443 and TikTok currently at 873 (as of posting). This database contains a number of profiles for tech companies that includes Airbnb (59), Spotify (153), Instagram (2) and Netflix (63).

A Crunchbase rank can be used to immediately identify new companies and investments so it is easier to find prominent players and take advantage of market trends. Crunchbase is also one of the number one tools to discover investment opportunities and best target search results based on context and activity, because the higher the rank, the higher the visibility to the outside world. Also, using it as a factor to determine how well-known and recognised a company is, can uncover great opportunities for journalists and publishers to feature up-and-coming projects that are generating a lot of buzz.

In addition to its breakthrough ranking on Crunchbase, Uhive was also making headlines in September, when Inc.com’s Lary Alton discussed the trickle-down effect of Facebook’s Libra on Uhive’s own digital currency; “Uhive, is a new kind of social network that allows you to connect with your friends and family while remaining mostly anonymous. It utilizes its own unique digital currency, the Uhive Token, allowing users to conveniently and quickly make economic exchanges with one another.” He continues to explain the benefits of being active on the platform saying, “On Uhive, users who practice normal social activities on the app will be rewarded; Uhive plans to share a portion of ad revenue with users on a weekly basis in exchange for their engagement.”

Uhive’s global launch date is set for early 2020, and will be releasing its beta in November.
To learn more visit www.uhive.com