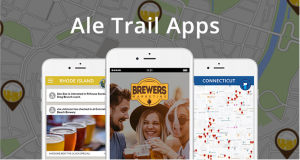 Brewers Marketing to Create App for CT and RI

BOCA RATON, FL, USA, December 5, 2019 /EINPresswire.com/ — Brewers Marketing, a developer of custom apps and web platforms for the craft beer market, has been tapped to create its inaugural Ale Trail apps for the Connecticut Brewers Guild and the Rhode Island Brewers Guild.

The Ale Trail app, which is branded for each guild, helps guilds promote regional economic growth and boost foot traffic to member breweries by putting a virtual beer passport program on usersŌĆÖ phones. With the Ale Trail app, users can see the locations, hours, and beers on tap at participating breweries, plan visits to breweries theyŌĆÖd like to visit, flag favorite places, and earn points towards swag such as T-shirts and growlers by stamping their passports at participating breweries.

Passport programs are growing in popularity among brewers guilds, and phone-based passports can increase engagement by eliminating the inconvenience of forgotten or lost paper passports.

ŌĆ£The Rhode Island Brewers Guild has seen a tremendous spike in demand for our paper passports, up from the days when 5,000 would last a year, to now, when 25,000 may not last through 2019,ŌĆØ said Gary Richards, executive director of the Rhode Island Brewers Guild. ŌĆ£And as popular as they have become, we know that we're missing folks who do everything on their phones and devices. Or worse, those who get most of the way through visiting all 28 breweries, then lose their passport! We knew it was time to go digital.ŌĆØ

The Rhode Island Brewers Guild chose Brewers Marketing for their digital passport because of the proven quality and effectiveness of their apps, Richards said. ŌĆ£We found Vermont to have the best- looking and best-working app, which Brewers Marketing built and supports.ŌĆØ

ŌĆ£WeŌĆÖre looking to bring our already successful passport program to the digital age to make it more convenient and user-friendly for our craft beer enthusiasts and brewery staff,ŌĆØ said Phil Pappas, executive director of the Connecticut Brewers Guild. ŌĆ£We decided to work with Brewers Marketing due to their reputation and success with other guildsŌĆÖ apps.ŌĆØ

Pappas added that he expects their app to augment the growth of their existing passport program. ŌĆ£The Connecticut passport was a $330k revenue generator for the brewing industry, and weŌĆÖre excited to see that jump in 2019 and beyond,ŌĆØ he said. ŌĆ£The number of breweries in the state has risen recently from 87 to 123. And ConnecticutŌĆÖs craft beer quality is exploding!ŌĆØ said Pappas. He added that despite being one of the smallest states, Connecticut still came in with 3 medals, 2 of them gold at the recent Great American Beer Festival in Denver. ŌĆ£In terms of medals, weŌĆÖre keeping up with large states with long-established craft beer scenes, like New York, Pennsylvania, Ohio, and Washington.ŌĆØ

Brewers Marketing apps have already been recognized for the economic benefits theyŌĆÖve brought to other guilds and their communities. In 2017, the Ohio On Tap app created by Brewers Marketing for the Ohio Craft Brewers Association won the prestigious RUBY award from the Ohio Travel Association for outstanding innovation in marketing destinations, experiences, or services. And beer aficionados have embraced the apps. ŌĆ£In a span of 10 months weŌĆÖve had 6,139 downloads,ŌĆØ said Eric Radovich, executive director of the Washington Beer Commission. ŌĆ£We have a 3,900-member Washington Beer fan club that can collect ŌĆśstampsŌĆÖ on this mobile app as they visit different Washington breweries. To date, more than 33,000 stamps have been collected. Since each stamp collected is worth two pints of beer, thatŌĆÖs 66,000 pints!ŌĆØ

Radovich added that the apps provide valuable data on visitor behavior and trends to guild members. ŌĆ£We are able to track which breweries have been visited and how many stamps have been collected at each.ŌĆØ

The craft beer trend continues to grow and is fast becoming a significant economic force. In 2018, the craft beer industry contributed $79.1 billion and 550,000 jobs to the U.S. economy, according to the Brewers Association. With its technical expertise and industry-specific marketing knowledge, Brewers Marketing is well-positioned to help other guilds build name recognition and foot traffic for their members.