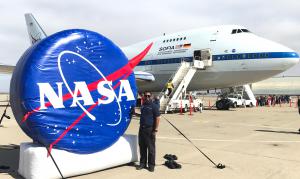 Kailash hails from South India and had lived and worked at Chennai for a significant time. His childhood and schooling were at Bengaluru. He moved to the US in 2016.

“I’m tremendously honored to represent both Civil Air Patrol and NASA who fuel my passion for learning and sharing aerospace knowledge to the community. My father’s long work experience in the aviation industry truly inspired me. I have been lucky and grateful to be surrounded by friendly and knowledgeable colleagues who help me keep motivated. I would strive to make a positive impact.” – Second Lieutenant Kailash Kalidoss

The Solar System Ambassadors (SSA) program from NASA works with motivated volunteers across the nation to share NASA science and mission discoveries through a variety of events that inspire their communities. This competitive program only accepts applications once per year, which are then vetted by NASA JPL staff for applicants with the right combination of presentation, motivation, and ideas for community engagement events. Since the Solar System Ambassadors program was reorganized in 2000, volunteers such as Kailash Kalidoss have conducted over 40,000 events that reached more than 9 million people directly through in-person events.
Kailash Kalidoss hopes to use his passion for aerospace and his presentation skills to excite and engage groups of all ages about aviation, astronomy and space exploration.

About NASA JPL SSA:
The SSA program of NASA’s Jet Propulsion Laboratory offers information and excitement about real missions that explore our solar system. SSA volunteers in communities throughout the country are selected by NASA JPL and trained with educational material. However, the opinions of the SSAs are not necessarily those of NASA or JPL. Further information about the Solar System Ambassador program is available at http://solarsystem.nasa.gov/ssa. JPL is a division of the California Institute of Technology in Pasadena, CA.

About Civil Air Patrol:
Civil Air Patrol, the longtime all-volunteer U.S. Air Force auxiliary, is the newest member of the Air Force’s Total Force. In this role, CAP operates a fleet of 560 aircraft, performs about 90 percent of continental U.S. inland search and rescue missions as tasked by the Air Force Rescue Coordination Center and is credited by the AFRCC with saving an average of 80 lives annually. CAP’s 61,000 members also perform homeland security, disaster relief and drug interdiction missions at the request of federal, state and local agencies. In addition, CAP plays a leading role in aerospace/STEM education, and its members serve as mentors to over 26,000 young people participating in CAP’s Cadet Programs. Visit www.GoCivilAirPatrol.com or www.CAP.news for more information.