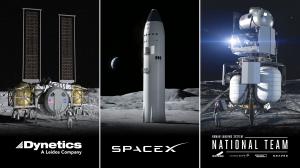 NASA has shown great wisdom in selecting three technologically different architectures for its Human Landing System to increase its chances for success.”
— Dale Skran, Chair of the NSS Executive Committee

WASHINGTON, D.C., US, April 30, 2020 /EINPresswire.com/ — The National Space Society (NSS) applauds NASA’s April 30 announcement by NASA Administrator James Bridenstine that SpaceX, Dynetics, and Blue Origin’s National Team have been chosen to provide human landing systems to carry crew to the Moon for Artemis III, the third phase of the Artemis lunar program. These commercial entities represent three different architectures for landing humans on the Moon. SpaceX’s giant Starship, capable of carrying 100 tons to the Moon, is a single-stage approach. A two-stage architecture will be developed by Dynetics in coordination with Sierra Nevada Corporation. Finally, Blue Origin’s National Team, consisting of Northrop Grumman, Lockheed Martin, and Draper, has plans to develop a three-stage architecture to return humans to the Moon.

“We have great companies that have invested many of their own resources into this great effort,” Bridenstine said. “So much work has already happened … we are going to the moon, with commercial partners … and ultimately, the goal is to get to Mars.” Bridenstine added, “Some contractors might focus on speed while others focus on sustainability more,” an additional indication that NASA is in for the long-term.

NSS Chair of the Executive Committee Dale Skran said, “NASA has shown great wisdom in selecting three technologically different architectures for its Human Landing System to increase its chances for success. It is especially exciting to see that for the first time NASA is officially including the SpaceX Starship/SuperHeavy in a major project. This is the right program structured the right way, with NASA allowing competing companies to design the human landers with mission-appropriate oversight, and then to provide NASA with lunar landing services without NASA owning the landers.” NSS Executive Vice President Alfred Anzaldúa added, “Today NASA again shows its deep commitment to achieving its goal of sending humans to the Moon and continuing to Mars in the most cost-effective and sustainable manner possible. This decision aligns with the NSS’s Roadmap to Space Settlement by supporting the use of commercial entities in returning to the Moon.”

It is noteworthy that NASA officials made it clear that they would be carefully considering design specifications to avoid delays due to changing requirements on the space agency’s end.

Artemis III is slated to take place after the Artemis I uncrewed flight test, carried out by NASA’s Space Launch System (SLS) rocket and Orion spacecraft, followed by Artemis II, a crewed flight by SLS and Orion. The overall aim of the Artemis Program is to deliver the first woman and next man to the lunar surface by the end of 2024, with the intention of maintaining a U.S. presence there indefinitely. The NASA press release can be seen here.

The National Space Society was founded in 1987 via a merger of the National Space Institute, founded by NASA’s Wernher von Braun, and the L5 Society, based on the work of space settlement pioneer Gerard K. O’Neill. It is the world’s largest pro-human-spaceflight organization.

To learn more about the NSS and its mission to establish humanity as a spacefaring species, visit us on the web at space.nss.org.