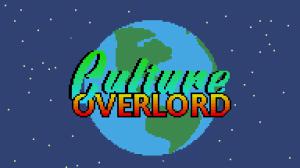 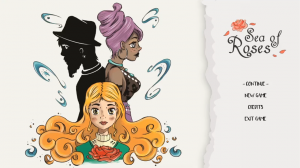 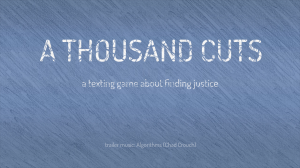 The topic of culture and its influence on our daily lives is complex and important. I hope my game manages to effectively introduce players to the subject.”
— Lucas Vially

ATLANTA, GEORGIA, US, October 16, 2020 /EINPresswire.com/ — In recognition of the role that one’s culture has in shaping the attitudes and beliefs that young people have toward dating, an Atlanta-based charity challenged video game developers to create video games that explore these influences. Since 2008 the nonprofit organization Jennifer Ann’s Group has produced video games promoting healthy dating relationships by focusing on different themes. Past contests have covered topics like consent, bystander awareness, gaslighting, and teen dating violence.

According to Drew Crecente, Executive Director of Jennifer Ann's Group:
“These video games encourage players to explore, examine, and evaluate the role one’s culture can play in forming their attitudes regarding dating and healthy relationships. By allowing game players to safely explore these issues through an interactive video game they are more likely to remain open to the concepts presented.”

Research has shown that one of the most difficult things for teenagers to do is to seek or accept help. To that end, exploring concepts regarding healthy relationships through video games has been shown to be more effective than traditional pen-and-paper learning. Jennifer Ann’s Group’s use of intentionally designed video games is an evidence based approach to abuse prevention that has been shown to change unhealthy attitudes about relationships in a single game session.

These new games about culture’s influence on dating are currently undergoing some additional development work. Some games will be available within the month with others coming early next year. For more information about these and other games please visit JenniferAnn.org.

QUOTES FROM THE WINNING GAME DEVELOPERS
"Making a game is quite a challenge. Making a game to adequately teach something is even more difficult."
Lucas Vially, ‘Culture Overlord’

"The topic of culture and its influence on our daily lives is complex and important. I hope my game manages to effectively introduce players to the subject."
Lucas Vially, ‘Culture Overlord’

“It has always been part of me and my life to create worlds, experiences, emotions and memories since it is something I love to do – and not only through digital games. Being part of this contest allowed me, once again, to do it with a bigger, more challenging and, undoubtedly, fulfilling purpose. The contest itself ended up having a fundamental role during the pandemic, to shorten the distance that existed between us. Playing and designing games has these things. And to see the concept sprouting and coming to life, first in art, and later, in programming, is always a magical moment and never less magical than the last time!”
Andreia Batista, Game Designer and Artist, ‘Sea of Roses’

“I am very happy to have had the opportunity to bring Andreia and Ariana's wonderful art to life. It was great to work in a shared creative environment and develop gameplay systems that felt appropriate for the theme of the game. I wanted playing ‘Sea of Roses’ to feel as if one is smoothly moving through a dream, with Marion exploring a culture foreign to her. I hope everyone enjoys experiencing her story!”
André Fidalgo Silva, Game Developer, ‘Sea of Roses’

“Participating in this contest was an incredible and challenging journey. It was a great opportunity to work along with my talented friends, learn together, and create a beautiful game experience from the beginning to end. We wanted the player to learn about the theme without being overwhelmed, to empathize with Marion in a personal level, and wanting to make the best decisions for her. Overall, I'm really proud of our game and hope it will make some difference in the way young people feel about dating and relationships!”
Ariana Parrilha, Game Designer and Artist, ‘Sea of Roses’

"’A Thousand Cuts’ is a game about finding justice for on-campus sexual assault. When two students realize they've been assaulted by the same person, they connect over text messages. As Rosa, pick and choose your responses to a cast of characters who each play a role in holding Duane accountable – or not.

“I started working on this game in a very different form in my first year of grad school, in 2018. It's grown slowly since then, but I was starting to worry that I'd never finish it in my spare time. Being chosen as a finalist for the 2020 Life.Love. Game Design challenge was the kick in the pants I needed to build an entire branch of the game (with the help of Rowan Wood, who rewrote my nonsense code, and Tea-Powered Games/Alina Constantin, who provided UI design prototypes and art).

“There are still two more storylines I want to implement, but I am incredibly grateful to Jennifer Ann's Group for believing in the concept behind ‘A Thousand Cuts’. Campus sexual assault is far more complex than it's often made out to be in headlines. The intersection of Title IX stipulations, the legal system, and a school's interest in protecting itself all make for a justice process that's shrouded in secrecy and hesitation.

“My hope is that my game might place players within this process, so that players understand the individuals caught in the center of it."
Elizabeth Ballou, ‘A Thousand Cuts’

MEDIA REQUESTS
Please contact Drew Crecente at Jennifer Ann’s Group for interview requests with the developers of these games or for high resolution images from the winning games.