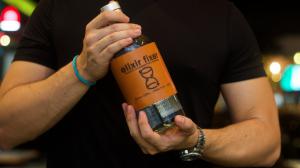 Simply wrap the bottle with the Elixir Fixer for 5 minutes 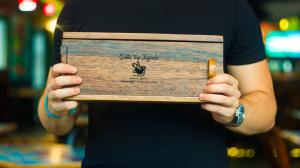 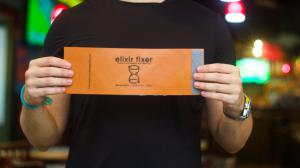 Achieving the Same Effect of Years of Wooden Barrel Aging in a Matter of Minutes Without Ever Touching the Liquid.

All men and women should drink equally and with Elixir Fixer they can”
— David T.

PUERTO VALLARTA, JALISCO, MEXCIO, October 22, 2020 /EINPresswire.com/ — Puerto Vallarta, Mexico—October 8, 2020—Quantum Miracle Spirits today announced the launch of Elixir Fixer, a nanotechnology product that is poised to revolutionize and disrupt the spirits industry by radically accelerating the alcohol aging process. By working on the molecular structure of the spirit, Elixir Fixer achieves an effect in wine and other alcoholic beverages akin to years of aging. Most wines and liquors replicate an effect of aging 5 to 10 years in just 3-5 minutes.

“Not only is taste vastly improved, but the beverage’s molecules become refined, making them easier for the liver to eliminate, lessening the ‘day after’ effect,” said Dr. Servando, the inventor of Elixir Fixer. “The harsh smell of alcohol gassing is also eliminated, allowing you to experience the true bouquet and aroma of the beverage’s recipe blends.”

Alcohol that’s been treated with the Elixir Fixer tastes richer, more mature and intense. Yet, it’s also noticeably smoother. Servando added, “The full-bodied flavors of the liquor will saturate your taste buds and linger long after you’ve swallowed the drink. The beverage runs down the glass just like superior-aged alcohol should! You’ll also notice that the beverage has a deeper hue and richer color than it had before going through the Elixir Fixer.”

The Technology Behind Elixir Fixer
The Elixir Fixer is a flexible nanoparticle patch that wraps around a bottle of wine or liquor. It contains 60,000 layers of nano circuitry, with every layer containing approximately 50 million nanoparticle micro circuit boards. This nanoparticle circuitry affect the alcohol’s atomic substructure to render it as if the spirit has aged. The time defying nanotechnology was developed by Dr Servando, a noted medical physician and quantum scientist specializing in genetic medicine and nanotechnology. "The molecular structures of alcohol can be reprogrammed to a quantum state where they can be altered to display new flavor characteristics. What normally requires several years can now be achieved in minutes."

Independently Tested and Validated
Elixir Fixer has gone through double-blind studies in two independent universities. Both studies concluded that treated beverage samples indeed exhibited changes in their aroma, taste, texture and color. The liquors tested were proven to show similar characteristics to beverages aged traditionally for many years inside wooden barrels. The tests were done within a three-minute treatment process utilizing the Elixir Fixer. No negative side effects were observed in the alcohol itself nor those who consumed it.

Dr. Servando – The Man Behind Nanotechnology
Dr. Servando graduated from Texas A&M University in 1985 and worked as a medical researcher in the genetics field from 1993 to 1999, producing genetic serums and medicines. He has immersed himself in genetic studies for more than 20 years. His idea of using nanotechnology on alcohol aging came after applications of nanotechnology to reverse degenerative illnesses and end-stage diseases in chronic and elderly clients. As he developed techniques and mechanisms for the human body, he thought of applying the same atomic and molecular principles to wine and liquor aging.

Pricing and Availability
Elixir Fixer launched on October 1, 2020 and is ready for purchase (only 200) on the Quantum Miracle Spirits’ website. The first 200 early adopters will get a numbered Elixir Fixer nano patch, along with the inventor’s signature on the patch, leather applicator, and the box. There’s a 30-day unconditional money-back guarantee also included in each purchase plus a 5 year limited warranty. “We guarantee its effectiveness for 5 years,” the company added. “It comes with a leather applicator and, packaged inside a handcrafted wooden box and makes an incredible gift.”