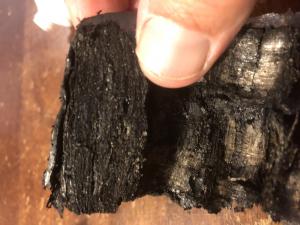 (Berkeley, California) – Our general announcement outlines our team goals and methods: Focused on the Herculaneum-type scrolls resulting from the eruption of Mt. Vesuvius in 79 AD and the like.

1. Objective is to “unlock”, and open previously unreadable incinerated papyrus scrolls of the Herculaneum type with the goal of detecting the writings within. The cultural patrimony of these generally inaccessible ancient documents is significant. Herculaneum type scrolls have proven to be difficult to open due to their brittleness and many have been destroyed.

2. Step one for the team was to make a reliable analog for the burned scrolls. We incinerated hundreds of Egyptian papyrus under temperature, without much Oxygen to Carbonize them. As you can see from Image 3, the density of our lab made scroll is quite dense. Since we do not have a scroll to compare to we hope this process replicates the same volcanic process that has made other scrolls. We believe this has been achieved.

3. Step two was the experimentation process, injecting proprietary chemicals into a significant number of burned scrolls and then treating them, again at various temperature, pressure, UV light and other conditions until these chemicals were absorbed into the burned scrolls. This process as you can see from the attached video https://vimeo.com/470282018 has made them more pliable.

4. Step three is to carefully cut open the treated scrolls with the goal of “unrolling them”, or cutting into small sheets, so they can be read. We believe this has been achieved.

Our team has made significant progress in developing new methods that show great promise in accessing this specific class of ancient material.

As can be seen from the photos and short video our Proof of Concept seems to work, although we do not know the actual density of a real scroll and have never seen one. We are further refining the process and would like a tiny fragment to confirm our process does not degrade the writing. Please contact me if you have one available or would like to discuss.