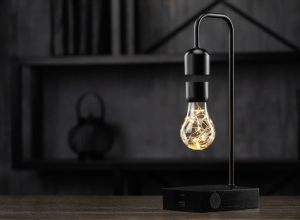 Gravita merges the power of electromagnets with minimalist design to bring the future of wireless power to your home. 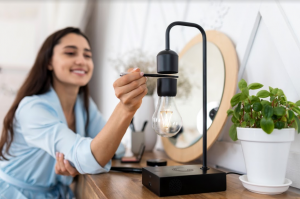 Gravita levitates in thin air while casting a relaxing glow. It also charges your devices and plays your favorite music — all with no strings (or wires) attached. 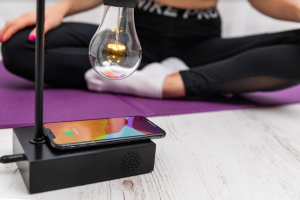 With Gravita’s built-in wireless charging function, it makes for the most convenient and minimalistic household item.

Gravita, the levitating lamp with built-in wireless charger and Bluetooth speaker, surpassed 50K in funding on the crowdfunding platform Kickstarter this week.

With our innovative lamp, you can light your desk wirelessly, listen to music wirelessly, and charge your devices wirelessly by setting them on the lamp base.”
— Angela Spangler

LOS ANGELES, CALIFORNIA, UNITED STATES, October 28, 2020 /EINPresswire.com/ — Floately, a manufacturer of levitating décor and wireless electricity accessories, recently launched its newest product, Gravita, to backers on Kickstarter. Gravita takes after Floately’s other innovations in that it’s a levitating lamp, but Floately has increased the versatility and the aesthetic appeal to make Gravita stand out.

Gravita is not just a lamp, but also a wireless Bluetooth speaker and charging dock. The charger is complete with a wireless charging base as well as USB-C and USB-A fast-charging ports.

It is also the first of Floately’s levitating appliances to feature inverted levitation technology. The bulb does not float above a magnetic surface but is instead suspended in mid-air below a magnetic rod. Gravita closely resembles a classic desk lamp and preserves desk space thanks to its elevated levitation base.

“At Floately, our goal has always been to make levitation and wireless electricity practical in the home. It’s not just about the ‘cool factor,’ it’s about making life easier,” said Angela Spangler, Product Manager. “We’re really proud of Gravita because it’s our most practical and versatile product yet—but of course, it still looks great. With our new lamp, you can light your desk wirelessly, listen to music wirelessly, and charge your devices wirelessly by setting them on the lamp base. In the future, we think every desk will have a lamp like Gravita.” Gravita is now accepting backers on Kickstarter at https://www.floately.com/gravita.

Gravita was designed by Floately engineers in the Scandinavian minimalist style. A wooden foundation contains the charger and speaker, and the levitation base is attached to a high-purity steel neck. The bulb floats freely under the base at the end of the neck.

The light emitted from Gravita was specially calibrated based on color temperature theory. This theory states that light intensities can alter human moods and even cause them to feel warmer or colder. Gravita’s light temperature falls at 1700K, in the “warm” temperature spectrum. It is the ideal temperature for stress relief and increased focus. This was done to create a lighting environment that can be enjoyed during both work and relaxation.

Users can easily pair their phone, computer, or smart TV to Gravita to access its Hi-Fi speaker system via Bluetooth. Gravita’s speakers are strong enough to project throughout a living room or office. The audio range is dynamic and the quality is typical of a high-end Bluetooth speaker.

The versatile charging port is ideal for modern users, as it allows for multiple devices to be charged simultaneously from a variety of ports. Wireless charging is possible by placing a device on Gravita’s wooden foundation. Charging will begin automatically. Gravita’s USB-C and USB-A ports provide the necessary charging outlets for the vast majority of devices. Both ports are equipped with fast-charging technology that powers devices 2x faster than standard chargers.

Floately’s promise of practicality is apparent in the Gravita’s durability. The steel and wooden components are built to last, and the LED bulb has a lifespan of 20+ years. The bulb is shatter-proof and reinforced, making it 10x stronger than the average bulb. To further prevent breakage, Gravita is equipped with a fail-safe magnet that activates in case of a power outage. If power fails, the magnet will pull the bulb up to the neck base to prevent it from falling.

The Gravita levitating lamp includes all of its internal features, including the Bluetooth speaker, wireless charger, and charging ports. It comes with one Edison bulb. Three additional bulb styles are available for purchase separately.

Learn more about Gravita and become a backer now on Kickstarter at https://www.floately.com/gravita.

Floately is an innovator in the fields of levitation technology and wireless electricity. The company is based in Honk Kong, but its team of inventors and engineers is spread throughout the globe.

Floately began experimenting with levitation technology in 2018. During this time, the first levitating products were being released, but they were impractical, fragile, and very expensive. The founders of Floately dedicated themselves to transitioning levitation technology from being a gimmick to having practical applications for everyday use.

Their first levitating lamp, Volta, was met with acclaim for its durability and stylish design. Now, Floately is proud to announce its newest lamp, Gravita, which takes levitation décor to new heights by introducing a wireless charging dock and Bluetooth speakers. Gravita is the most versatile levitating lamp ever made.

Support Floately by becoming a backer of Gravita at https://www.floately.com/gravita today.