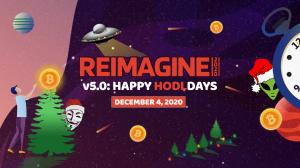 RI2020 brings a cup of holiday cheer. Holly-jolly interviews from returning favorites and exciting new speakers celebrate the most wonderful time of the year.

SAN FRANCISCO, CA, UNITED STATES, December 3, 2020 /EINPresswire.com/ — MouseBelt Blockchain Accelerator–an ecosystem supporting students and startups in the blockchain industry–along with their production partner, margin-first cryptocurrency exchange Multi.io, announced today they will be releasing version 5.0 of their virtual conference series REIMAGINE 2020 on Dec 4. The event will follow an end of year holiday theme titled: “Happy HODLdays” Interviews with top technologists, business executives, students and educators alike will focus on the the year in review, what brought joy, what the hopes are for the future, and how to talk to relatives about crypto at the next celebration.

The newest series will feature all-new content produced with the support of the Blockchain Education Alliance partners–a network of industry leaders committed to supporting blockchain education, research, and entrepreneurship at universities and beyond and sponsor Blockcrafters. Returning speakers include Dan Held, and Roger Ver, James Simpson, executives from mStable, Binance.US, CipherTrace, Fetch.ai, Boeing, and Bitcoin.com. In addition, many new interviewees will join the special from companies such as Gokhshtein PR, Kraken, WazirX,, The Wolf Of All Streets, StrongBlock, mStable, Vite Labs, and more. Student blockchain organizations from MouseBelt University–an educational platform for students from 100+ schools in 24 countries, will also participate.

The virtual conference and networking event is designed to connect blockchain talent to infrastructure and industry. The goal is to welcome all far and near to share their experiences and education. The team hopes these stories can serve as both entertainment and advice for the students and professionals alike tuning in.

“Despite the ups and downs of 2020 the blockchain community has continued to make progress towards a financial revolution. And we've found new ways of doing business and sharing knowledge along the way, it’s time to celebrate.” said Ashlie Meredith, Head of Education at MouseBelt and Co-Director of REIMAGINE 2020.

MouseBelt is an ecosystem promoting blockchain innovation by supporting hands-on development of the emerging projects and leaders in the industry. The leaders they support are:

Startups – MouseBelt accelerator supports early-stage companies with capital and in-kind investments;
Builders – MouseBelt Engineering supports developers and projects with open-source tools and a development shop; and
Community – its media and university projects encourage newcomers to get involved with blockchain.