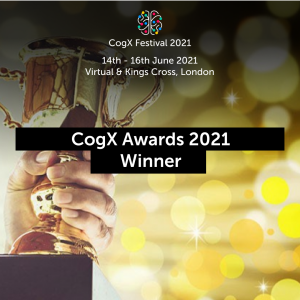 MORF Gallery is a Silicon Valley and Hollywood-based creator, enabler and purveyor of fine art from award-winning artists that produce one-of-a-kind and limited-edition pieces using breakthrough technologies like artificial intelligence, robotics and neuroscience.

The core of MORF’s DNA is innovation, and Oxia Palus showcases that so elegantly with their ability to rediscover historic art lost to ages with artificial intelligence.”
— Scott Birnbaum, CEO of MORF Gallery

George Cann and Anthony Bourached, Ph.D. candidates at University College London, founded Oxia Palus in 20219 after attending CogX, a festival at the intersection of AI and industry, helping attendees to network and get inspired at the potential crossing points of different technological innovation. Anthony Bourached, Oxia Palus Co-founder said, “It was no surprise that George attended sessions on X-ray analysis of pentimento, and style transfer for art at CogX. Both of these independent innovative technologies are central to the direction that inspired our work. Now, two years later, Oxia Palus brings back to CogX a revolutionary innovation inspired by these two ideas creating an awe-inspiring vision." Bourached went on to say, "As CogX is one of the key inception points of Oxia Palus, it is such a great privilege to receive the award for Best Innovation in the Creative Arts here.”

Oxia Palus partnered with MORF Gallery, a Silicon Valley and Hollywood-based creator, enabler and purveyor of fine art that enables technologies like AI, neuroscience, robotics and NFTs, to transport their groundbreaking research to the art world for collectors, investors and art lovers. The companies jointly developed two patent pending technologies to bring AI created artworks onto canvas and then protect them from forgery. Scott Birnbaum, CEO of MORF Gallery said, “We are so proud that Oxia Palus, one of our founding five artists, won such a prestigious award on the global stage. The core of MORF’s DNA is innovation, and Oxia Palus showcases that so elegantly with their ability to rediscover historic art lost to ages with artificial intelligence.”

To celebrate the ushering in of this new era in art, MORF Gallery is hosting a live viewing of Oxia Palus’ NeoMasters™ together with a Q&A session with CogX winners George Cann and Anthony Bourached at 18:00 BST June 17, 2021. Interested parties may join in person at Lebenson Gallery – London or virtually by contacting scott@morf.gallery. MORF is partnering with Lebenson Gallery to showcase the NeoMasters™ Exhibition for the first time publicly through the end of June. On display will be two paintings, one found beneath a Picasso and a second beneath a Modigliani.

The world’s first Neomaster™ was first discovered painted beneath Picasso’s ‘La Miséreuse accroupie’ known as the 'Crouching Beggar' (1902). This hidden work of art that is believed to be of Parc del Laberint d'Horta near Barcelona, a place long recognized as a foundational influence for Santiago Rusiñol and Pablo Picasso. Using processed X-Ray fluorescence images of 'The Crouching Beggar' and paintings from Rusiñol, Oxia Palus reconstructed the lost masterpiece – Parc del Laberint d'Horta using AI. Informed fine art collectors and investors now have the rare opportunity to collect one of the numbered limited edition NeoMaster currently priced at $11,111.11.

The world’s second NeoMaster was discovered hidden beneath Amedeo Modigliani's 'Portrait of a Girl' (1917) which is currently held at the Tate in London. The figure of a woman researchers suggested is Modigliani's ex-lover, Beatrice Hastings was painted over by Modigliani a year after the couple ended a tumultuous relationship in 1916. NeoMaster 2 is now available starting at $22,222.22. Only 64 canvas editions of the world's second NeoMaster will ever be made available, one to commemorate each year of Hasting's life.

The NeoMaster is delivered to customers as a framed painting on canvas, comes with a MORF Gallery ArtStick™ showcasing the award-winning neomastic process and includes an NFT. To learn more about the world's first two NeoMasters or set up a private consultation, visit www.morf.gallery.

About:
MORF Gallery is a Silicon Valley and Hollywood-based creator, enabler and purveyor of fine art from award-winning artists that produce one-of-a-kind and limited-edition pieces using breakthrough technologies like artificial intelligence, machine learning, robotics, and neuroscience. MORF Gallery adds a new experiential dimension with an industry-first NFT ArtStick™ that transforms any TV into a mind-expanding art gallery that takes premium collecting to a new level for art lovers, collectors and NFT art investors. ArtStick™ is a trademark of MORF Gallery. Artists who are interested in learning more about how to potentially become part of the MORF Gallery collective can contact scott@morf.gallery.

CogX is now in its fifth year as the Global Leadership Summit and Festival of AI & Transformational Technology, is addressing the question, ‘How do we get the next 10 years right?’. More than 44,000 attendees registered for the event including 3500 C-suite executives. More than 1000 speakers took the stage including tech leaders like NVIDIA CEO, Jensen Huang Jensen Huang, iPod inventor and iPhone co-inventor Tony Fadell and actors Robert Downey Jr. and Matthew McConaughey.

Own the World’s First NeoMaster™ Found Hidden Under a Picasso