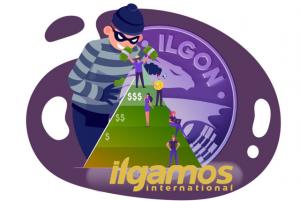 DUBAI, UAE, June 22, 2021 /EINPresswire.com/ — ILGON is a new Ethereum-based blockchain platform with its own cryptocurrency, positioning itself as an ecosystem with endless possibilities. At first blush, the project seems perfectly legitimate. It has a team, an exchange listing, and even a few videos, though in Hungarian, which is no surprise because the team is also Hungarian.

The CEO – Attila Vidakovics, precious little information can be found about this person on the Internet, except that he has appeared in the Hungarian cryptocurrency spaces for many years. The COO of the team is more important as Matyas Andras Den is positioned as the company behind ILGON. Even though Technokrats Ltd. has little to do with cryptocurrencies, it can be seen on the ILGON website. A simple search on the Internet reveals that using WIPO trademark data, the MLM company name Ilgamos can be found that has existed for many years, as well as another not insignificant name – Geza Kapitany, also Hungarian. The question that arises is how is any of this related to ILGON?

ILGON did not conduct any ICOs, IPOs, or any other investment attraction activities that could lead it into the cryptocurrency world, and as of today, we can see a listing on the only WhiteBit exchange and a complete lack of data on CoinMarketCap. It is a centralized cryptocurrency that performs the main operational functions of the platform. This in itself would not have been a problem if the "famous" Ilgamos, Dubai-based, were not behind ILGON.

According to public information, ILGON is located in Budapest at the Bank Center office building. The office may be closely related to Technokrats Ltd., which is Ilgamos's long-term partner in Hungary. It is an interesting fact that the offices of ILGON and Ilgamos are located in the same business center.

In turn, Ilgamos's Facebook profile does not reveal any information about ILGON, and interestingly, the social media channels of ILGON do not promote Ilgamos either. Regardless, Ilgamos has been openly promoting ILGON to its customers and partners via e-mail newsletters since the end of May 2021. Of course, that would not have been a problem except for one thing.

Ilgamos has attracted over a million euros, mainly from Asian private individuals, over the past few years, but has never provided the promised benefits or products to its investors. Its previous products can be found on the official website, where BTC, Ethereum, and Ilcoin are displayed. However, Ilgamos suspended the sale of these cryptocurrencies, citing unsubstantiated information in May 2020. Since then, Ilgamos has not paid compensation to its investors.

Thus far, several legal processes are underway against Ilgamos and its partner companies. They will soon be made public. You don't have to go far, as Google search results immediately display numerous information about the previous illegal activities of Ilgamos. The essence of the pyramid is that deposits do not yield any product or income. The commission is what circulates among the members until the bubble simply bursts. The scheme collapsed in May 2020, and Ilgamos is currently trying a rather tricky way to replay a million euros debt to the investors using the newly created ILGON coin, rather than refund them in agreed cryptocurrencies or simply return the money back.

We do not talk about the future of ILGON, but the publicity it currently has, and the secrecy that accompanies Ilgamos, will not shed any favorable light on Attila Vidakovic’s team. This raises a question regarding the purpose of creating ILGON. According to the current situation, the project looks like a life raft which Geza Kapitany, CEO of Ilgamos, is trying to use to pay off his debt of several million euros to investors.

The Investors who have been affected by Ilgamos are finding themselves in a difficult position now. By not accepting ILGOIN as compensation, they risk losing all of their investment.
Ilgamos makes no valid statement as to why it is unwilling to repay its debts in previously agreed currencies. The dilemma is compounded by the Ilgamos team’s silence, which clearly does not intend to prove that the project is a legitimate undertaking.