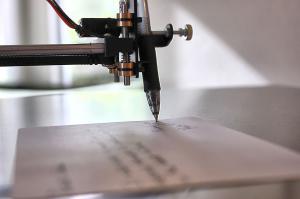 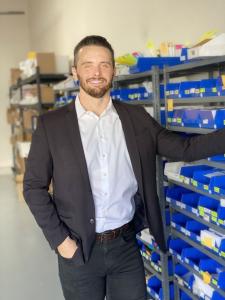 If it wasn’t for the University of Arizona, I would not have the best things in my life: my family, a professional football career, nor would I have been inspired to launch Simply Noted.”
— Rick Elmore, founder and CEO of Simply Noted

TEMPE, ARIZONA, UNITED STATES, June 22, 2021 /EINPresswire.com/ — Fast-growing Arizona-based startup Simply Noted has officially sent its one millionth automated handwritten note this month. To honor where the company started, the note was sent to Senior Lecturer of Marketing Tirthankar Roy in the Eller College of Management at the University of Arizona.

Simply Noted, an automated handwritten letter company, was launched after an “a-ha” moment in Roy’s class in 2017. Rick Elmore, who graduated with his BA in 2010, was an Eller MBA student at the time and remembers being struck by Roy’s offhanded comment during a lecture that handwritten notes have a much greater open rate than emails. Elmore thought that handwritten notes as a sales and marketing strategy could be effective, but handwritten notes were very time consuming to produce, so he experimented with machinery to automate and scale the process. A year later, Simply Noted was born. The company produces authentic-looking notes that appear to be handwritten with a pen by using plotter machines common in the architecture field. Handwriting fonts can be chosen and a person’s own handwriting can be uploaded.

Upon reaching the one millionth note milestone, Elmore programmed his machines to draft and send a customized thank-you note to Roy that expressed his gratitude for all that the professor and that the University of Arizona have given to him.

“If it wasn’t for the University of Arizona, I would not have the best things in my life: my family, a professional football career, nor would I have been inspired to launch Simply Noted,” said Rick Elmore, founder and CEO of Simply Noted. “In reaching this milestone of sending our one millionth note, I wanted to take the opportunity to thank Tirthankar Roy for inspiring me to launch a business that is truly helping others to build relationships through the power of the handwritten note.”

Today, less than three years after its founding, Simply Noted produces real pen-written letters each month for a variety of companies across industries as well as individual consumers to send authentic-looking handwritten notes to build relationships, express gratitude, and celebrate important occasions. Simply Noted employs 11 staff and is on track to surpass $2 million in revenue in 2021 alone.

Elmore started his football career at the University of Arizona as a defensive end, where he was the Pac-10 Sack Leader for two years and twice nominated for the Hendricks Award for his defensive play, among other recognitions. Following graduation, he was drafted to the Green Bay Packers as a linebacker and went on to play for San Francisco, San Diego, Arizona, Cleveland and Washington before retiring from the National Football League. Prior to becoming an entrepreneur, Elmore was a top-ranked sales executive with several medical technology companies before deciding to pursue his MBA at the Eller College of Management at the University of Arizona.