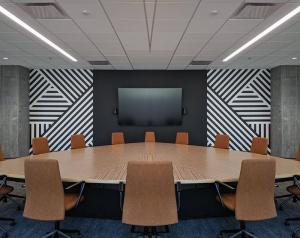 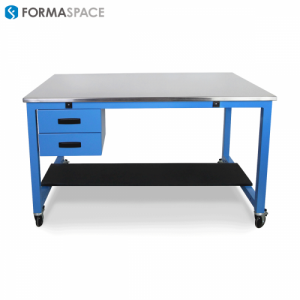 Shown above is a durable, mobile workbench for use in a laboratory. The heavy-duty powder-coated steel frame and chemical-resistant stainless steel work surface will provide years of service. 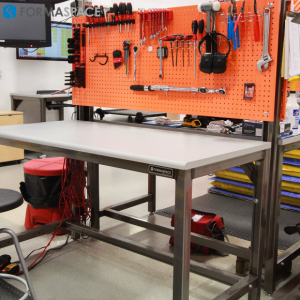 Because Formaspace builds furniture to order, we can offer a wide range of customization options that will make your laboratory, manufacturing facility, or office more productive.

Take a look at how management frameworks change over time to keep up with the current challenges facing business organizations and government agencies.

Much of the thinking behind today’s management frameworks can be traced back to the companies founded by Sakichi Toyoda, starting with the Toyoda Automatic Loom Works that was established in 1926. ”
— Formaspace

To get a complete picture of the future of management frameworks, we’re going to go back to the very beginning – to the start of the 20th Century when the first waves of the industrial revolution were still in full swing across the USA.

It was in these days that Henry Ford launched the famous Ford Model T (1908), and by 1914, Ford factories were churning out thousands of cars every week. The philosophy of “Fordism” transformed car manufacturing from one of highly skilled craft labor fitting individual parts together to a new era of unskilled labor assembling “interchangeable” parts (built to exact tolerances) on a moving assembly line.

In this era, Frederick Taylor attained fame as what we would call today the world’s first “management consultant.” Taylor’s seminal work, The Principles of Scientific Management, pioneered the use of time-management studies to increase worker productivity and efficiency in the factory, primarily in the steel industry.

Henry Gannt helped bring order to complex industrial-scale projects, thanks to his eponymous charting system that helps visualize complex schedule dependencies between individual tasks in an easy-to-grasp way. Gannt charts were adopted by US military planners in World War I and remain a mainstay management tool to this day; one remains easily recognizable to users of Microsoft Project and other software planning tools.

In the interwar period, Walter A. Shewhart, working at Bell Telephone, wrote Economic Control of Quality of Manufactured Product (1931), followed by Statistical Method from the Viewpoint of Quality Control (1939). Together, these works form the basis of today’s modern statistical quality control systems. Physicist and co-collaborator W. Edward Deming developed these ideas further for use in increasing product quality in industrial manufacturing, promoting them as the “Shewhart Cycle.” After WWII, this system became better known by the acronym PDCA (Plan-Do-Check-Act) and was widely embraced, as we’ll see shortly, by Japanese industrialists.

Another management system that’s still widely used today is CPM, short for the Critical Path Method. Building on the management philosophies of DuPont in the 1930s, CPM came into its own as an organizational tool when it was used to manage the sprawling yet top-secret Manhattan Project to build the world’s first atomic weapon during World War II. The US military formalized the definition of CPM in 1957 as part of the Polaris submarine-based nuclear missile program. The CPM approach is so familiar to us today that we often use CPM lingo in everyday conversations, for example, saying “we need to ‘fast track’ a project” – without realizing it’s an expression that comes directly from CPM terminology.

Concurrent with the formalization of CPM in 1957, the US Navy introduced PERT (Project Evaluation Review Technique) in 1958. It’s a visually-oriented project planning tool that’s highly complementary to CMP. PERT makes it easier for project planners to visualize critical path tasks and calculate the impact that changes (such as adding more resources or incurring unexpected delays) will have on scheduled delivery estimates. PERT charts can be presented in a form that at first glance resembles a Gannt chart, although it’s become more common for the activity descriptions to be moved onto each action node in the chart (an approach known as the activity-on-node (AON) method).

In the aftermath of World War II, Japan fell under US Military administration, and Japanese industrialists looking to rebuild their factory turned to US experts for inspiration.

Perhaps no other American during this period had a greater impact on Japanese industrial production than W. Edward Deming.

Deming, who, as we mentioned earlier, had promoted the statistical quality control methods developed by Walter A. Shewhart before the war, was hired by US officials to oversee the 1947 Japanese census where he pioneered the use of sampling techniques still used by the US Department of the Census and the Bureau of Labor Statistics.

Deming later trained hundreds of Japanese engineers, managers, and scholars in statistical process control (SPC) – many of whom were employed by what would later become world-famous brand name companies, such as SONY. In the process, Deming became a celebrated management consultant “guru,” and in 1951, he was honored by the Japanese Union of Scientists and Engineers (JUSE) for his contributions to Japanese manufacturing quality with the establishment of the annual Deming Prize.

Much of the thinking behind today’s management frameworks can be traced back to the companies founded by Sakichi Toyoda, starting with the Toyoda Automatic Loom Works that was established in 1926. (Today, it’s known as Toyota Industries Co., Ltd.)

Ford, Taylor, Gannt, Shewhart, and Deming helped lay the foundation for today’s modern management frameworks. But Sakichi Toyoda, who founded Toyoda Automatic Loom Works in 1926, and his eldest son Kiichiro Toyoda, who founded its Toyota Motor Co., Ltd. subsidiary in 1937 – as well as Toyota engineers Taiichi Ohno and Eiji Toyoda – were responsible for inventing some of the most significant, influential manufacturing principles of the 20th Century.

Consider the idea of stopping the production line when a problem arose – this first appeared at Toyoda Automatic Loom Works. So too did the use of the “5 Why’s” efficiency mnemonics – Seiri (sort), Seiton (organize), Seiso (clean), Seiketsu (standardize), and Shitsuke (sustain) – used to this day to help organize factory production for maximum productivity and highest possible quality output.

Spearheaded by the company’s brilliant engineers Taiichi Ohno and Eiji Toyoda, the Toyota companies introduced one revolutionary idea after another in the years 1948 through 1975, including:

Collectively, these concepts became known as TPS, or the Toyota Production System (Today it’s better known as the Toyota Way), which paved the way for management systems of the future, such as TQM, SixSigma, Lean Manufacturing, and more.

What were American manufacturers up to during the post-war period?

The 1950s and 1960s was a period of flashy conspicuous consumption, with television commercials promoting the new models of cars, appliances, or home entertainment systems – as part of a strategy that emphasized planned obsolescence over quality.

With the quality of American products languishing in this era, the quality control department manager Philip B. Crosby at the aerospace firm Martin Company (later Martin Marietta and today part of Lockheed) set about to revive quality production across the supply chain.