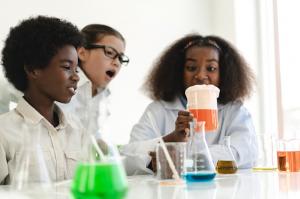 STEAM is for everyone

A recent Pew Study reports Black students make up only 7 percent of STEAM bachelor’s degrees, but one trailblazing education advocate is changing the narrative.

A recent Pew Study reports Black students make up only 7 percent of STEAM bachelor’s degrees, but one trailblazing education advocate is changing the narrative. Meet Naomi Woods, founder of Stemondae, a multi-level platform drawing underserved populations into the five key areas — science, technology, engineering, arts and mathematics. Woods, a doctoral candidate at Texas A&M University, knows it takes more than dreams and wishes to bring our children up to snuff. The educational forerunner says, “it takes creative thinking and a clear strategy to forge a path for the next generation of STEM graduates.”

The purpose of Stemonade is to provide college and career readiness for the 21st century, and the best way to do this is to start at home. Stemonade offers a family-focused STEAM kit to encourage households “to learn and explore together.” The influence of parents on their children’s educational future is well documented, but every family unit can use a little direction and that is where Stemonade comes in. Naomi created a fully integrated video component, coupled with industry-related books, experiments, tools, resources, and even dramatic play elements to make STEAM learning a part of everyday living. Each Stemonade kit complies with TEKS and Common Core standards. With support from Stemonade, parents do not need to downplay STEAM subjects, instead the entire family unit can learn together.

According to the Bureau of Labor Statistics, STEAM jobs are the wave of the future and Naomi is answering the call. The Bureau projects these fields will double in demand, but the laborers are few. Through Stemondae, Naomi positions students of color and young women to stand shoulder-to-shoulder with their international counterparts. As a former regional administrator for College and Career readiness programs who helped some 500,000 students navigate the path to higher education, Naomi knows what students need to be successful in the next phase of their journey.

The interactive program enhances a child’s education through hands-on experiments, literacy components, SEL, and career exploration activities. Though women make up half of the workforce, only 27 percent consider a career in STEAM fields. Naomi knows it is vital to give a girl a chance to explore STEAM fields early on and she offers career exploration activities to encourage young girls to see themselves as scientists, engineers, and mathematicians. A recent study by Junior Achievement reports a decline in STEAM interest among teens, age 13-17 years old. Naomi Woods, who holds her Master’s in Education from Sam Houston State University says, “we can pique their interest at an early age through programs like Stemonade.”

Naomi is on a mission to bring STEAM fields to the Black and brown communities and other underrepresented groups. With nearly 20 years in the field of education, Naomi knows what students need to compete on the world stage. According to a report cited at the National Black Caucus, some 73% of Black adults identify as gamers. These African American consumers partake in video gaming events which rely heavily on mathematics, engineering, and computer programming — but the same demographic is underrepresented on the development side. Gaming is a trillion-dollar business, and with training and clear career choices, underserved people can carve out a piece of the cyber pie for their communities. Woods has the revolutionary answer to this systemic imbalance. Using Stemonade’s trailblazing program, communities of color can move from being consumer based to being a workforce of innovative content creators.

For more information about Stemondae, or to interview Naomi Woods, contact her at Phone: 469-278-4594 Email: Naomi.Woods@ed21.net