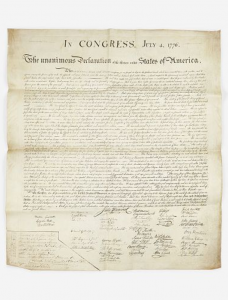 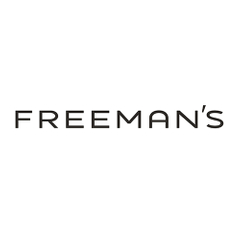 NEW YORK, NY, UNITED STATES, June 28, 2021 /EINPresswire.com/ — Over a year after fighting began with the Battles of Lexington and Concord, the Declaration of Independence made clear the Thirteen Colonies’ intention to fully separate from Great Britain. The document also hinted at the values a new American nation would try to uphold. “We hold these truths to be self-evident, that all men are created equal, that they are endowed by their Creator with certain unalienable Rights, that among these are Life, Liberty and the pursuit of Happiness.”

Just days before the 245th anniversary of the document’s ratification, Freeman’s will offer a copy of the Declaration of Independence in a single-lot sale. This is one of 200 copies produced by William Stone between 1820 and 1824. Among the most notable recipients of these pieces were the three remaining signers of the original document: Thomas Jefferson, John Adams, and Charles Carroll of Carrollton. The copy coming to auction was one of two presented to Carroll, the Declaration of Independence’s last surviving signer and the only Catholic member of the Second Continental Congress. Learn more about Charles Carroll of Carrollton in Auction Daily’s upcoming extended coverage.

The original copy of the Declaration of Independence was in poor shape by 1820. The document was nomadic for at least part of the American Revolution, traveling from hand to hand and being packed away or unfurled on a whim. Concerns by John Quincy Adams and others regarding the document’s long-term preservation led to the copies’ production from 1820 to 1824.
[Stone, William J.] In Congress, July 4, 1776. The unanimous Declaration of the thirteen united States of America
https://www.bidsquare.com/online-auctions/freemans/stone-william-j-in-congress-july-4-1776-the-unanimous-declaration-of-the-thirteen-united-states-of-america-2264518

Adams’ instincts were correct. In 1841, the original Declaration of Independence went on public display in Washington, D.C. Despite the best of intentions, the document would be exposed to sunlight damage for 35 years, fading most of the original ink. Meanwhile, this copy of the Declaration of Independence comes to auction nearly two hundred years after its creation with only “original folds and light soiling,” according to the auction house. Register to bid and learn more about this lot on Bidsquare.