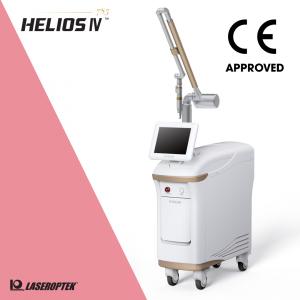 In addition to high stability and performance, the HELIOS' 785nm picosecond wavelength can effectively address both existing and expanded treatment indications.

The HELIOS Series introduces its very own 785nm picosecond laser that practitioners can use to optimize their existing treatment programs.”
— CJ Lee, CEO and President of LASEROPTEK

The unprecedented high-powered laser system’s unique and superior solid-state laser resonator – developed by LASEROPTEK Co., Ltd. – allows for both emission of dual 1064nm and 532nm nanosecond pulses and 785nm picosecond pulses all under a single platform.

The HELIOS IV’s 785nm, like the 694nm, 730nm, and 755nm wavelengths, demonstrates strong melanin absorption curves for the effective treatment of pigmented lesions with minimal side effects. It has also been determined that the 785nm resembles closely the 1064nm counterpart, allowing for deeper penetration depths.

The 785nm’s picosecond pulses alone may prove effective in the photomechanical breakdown of both natural and artificial pigmentations, but it may also be optimized for expanded indications in combination with 1064nm and 532nm nanosecond wavelengths.

Designed to treat tattoo removal, benign pigmented lesions removal, acne scars, skin rejuvenation, and other skin-based indications, the HELIOS Series has sold more than 5,000 units in over 50 countries since its first release in 2003.

Commanding a high market share across various global regions, including in Asia, market leaders and practitioners, who many still use the first model to date, praise the HELIOS Series for its high stability and performance during treatments.

Expressing confidence in the HELIOS IV 785’s success across global markets, CJ Lee, CEO and President of LASEROPTEK, said: “Its development similarly resembles LASEROPTEK’s own history. Just as the company is transitioning from stable management to an aggressive one, the HELIOS Series is also innovating. And after 18 years of demonstrating proven stability, the HELIOS Series now will introduce its very own 785nm picosecond laser that practitioners can use to optimize their existing treatment programs.”