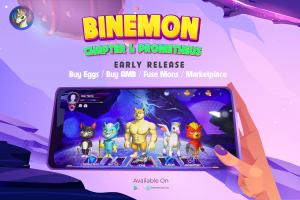 In an attempt to revolutionize the Crypto Industry, Binemon is proud to introduce the concept of “PLAY TO EARN”.

MANILA, PHILIPPINES, July 3, 2021 /EINPresswire.com/ — "Play to earn" – the phase that created the mentioned success is proving its effectiveness in the context of the current epidemic and state of unemployment. At the same time, there is a scarcity of blockchain-based game projects. Is the NFTs gaming pie still attractive enough for newcomers?

Binemon – a brand new NFT game with the goal of exploring the definition of 'play to earn' comes in.

The game developers had revealed that it took them more than a year to conceptualize, deploy and perfect the infrastructure. NFTs and 3D graphics take more time and effort than most.

Based on the plot and the mix of a variety of game genres, Binemon is introduced as an open world with the ability to endlessly tweak the game rules, quantity, quality of characters and items.

The element of luck is the basic characteristic of the gacha genre, which when combined with the transparency in blockchain creates the attraction in the nature of ownership, competition and spending.

One unique highlight about the character design in the game is that they are inspired by the trendy memes in the online community. It is without a doubt that everyone now knows about the Shiba dog from Dogecoin, or the legendary Pepe, and that is not everything Binemon has to provide.

Introduced as a product developed on DRK Chain, an emerging blockchain that is quite uncommon in the market. The reasons given by the game publisher of why DRK Chain is suitable for their platform selection are:

Fast and stable transaction speed (up to 5000 TPS, 2-second block time)
Their cheapest gas fees help save cost on player activities and transactions on NFT Marketplace.
Smart Contract and DaRK security protocol offer high customizability and security for the constantly evolving nature of NFT games.
This is a new blockchain platform with a low market cap and promises a high-profit potential for player achievable rewards for joining Binemon
Development

The game was hinted on their official Twitter page to progress through a total of 10 phases with a development time of approximately 3 years to introduce distinguished plots. Each phase when released will come with more features, new characters, items and fighting modes.

Expected to be released at the end of July, 2021 with its first phase, Binemon: Prometheus focused on the collectible aspect of the game. Gamers will purchase eggs to hatch Binemons, and fuse different species into stronger, more valuable Binemons (level up).

With Idle RPG being the focus of the game, the player needs to own several items that enable them to explore special features of the game later on. Therefore, the introduction of Phase 1 helps the community to get familiar with NFT and the way of exchanging and crafting items to prepare for Phase 2 (Battling), when everyone has built their own army.

3/ Concept of play to earn

Binemon belongs to the game category that is definitely not new to the market. However, it is worth looking forward to with the NFT infusion that gave birth to the concept of 'Play to earn'.

The direction of development paints a never-ending world to obtain cryptocurrency, which every gamer or anyone who has access to their smartphone is excited for and can benefit from. The game publisher has announced Version 1 to be released at the end of July, 2021. Let's wait and see if Binemon is truly captivated and bring value to our life in this time of epidemic.

Binemon is a virtual pet NFT game combined with elements of an Idle RPG game. In addition to collecting and trading eggs, ambrosia (fusion), characters, items, land, and players are also connected to fight in PVE, PVP modes and receive cryptocurrency rewards.

The Idle RPG game genre with popular names such as Lost Centuria, Adventure, and Idle Heroes are storming the global gaming community. However, they solely serve the purpose of entertaining players. The NFT blend has opened up the capability of owning, exchanging and trading in-game items, which is a shortcoming of traditional games.