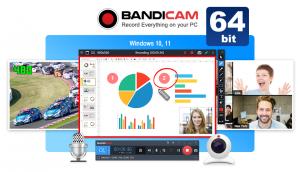 Bandicam company, which specializes in developing and selling PC software, has now released a 64-bit version that works on both Windows 10 and Windows 11.

The Bandicam 64-bit version can maximize the recording performance and it works stably on the 64-bit operating system of Windows 10, as well as Windows 11, Microsoft's new operating system.”
— Denny Oh

IRVINE, CA, UNITED STATES, July 13, 2021 /EINPresswire.com/ — Bandicam company has now released a 64-bit version of their popular high-performance video recording program. As opposed to their 32-bit version, the 64-bit version of Bandicam runs only on 64-bit Windows operating systems and is available with a program loading speed that is 2.5 times faster than the previous version.

The developers of the app have stated that the screen recording performance for the 64-bit version has been improved by 10%, making it possible to work at a faster speed. The performance of real-time drawing functions, such as pen drawing, arrows, shapes, and erasers, has also been improved, enabling for a more precise and smooth writing experience.

As evident, Bandicam is a high-performance screen recording program that can record anything you see on your computer screen, from educational PowerPoint videos to entertaining game videos, all in high definition.

With the rapid rise in demand for video production and conferences, as a result of the COVID-19 pandemic, this high-performance program is being increasingly used in the production of video content by some major companies.

At a recent press conference, Denny Oh, CEO of Bandicam Company, said, “In a time where more and more people are using the 64-bit operating system, we have decided to provide the Bandicam 64-bit version so that users can maximize their recording performance. Bandicam is the only screen recording program out there that helps you carry out a screen capture with a high compression ratio while preserving the original work's video quality and providing performance far superior to other screen capture software that have similar functions. The new 64-bit version of Bandicam works stably on the 64-bit operating system of Windows 10, as well as Windows 11, Microsoft's new operating system.”

Bandicam Screen Recorder can be used to record leading 2D and 3D games, such as Minecraft, PUBG, and World of Warcraft, while also supporting live recordings of internet TV streaming videos from sources like YouTube, BBC, and Zoom. Users have also been using Bandicam to record their desktop screen, webcam, and Facecam, as well as to capture 24-hour recordings. The major features included in Bandicam include real-time drawing, webcam overlay, mouse defects, mixing of your own voice, scheduled recording, and chroma key for webcam overlay.

About Bandicam
Bandicam is a lightweight screen recorder software for Windows that can capture anything on your PC screen as a high-quality video.

This app also makes it possible to record a certain area on a PC screen or capture a game that uses the DirectX/OpenGL/Vulkan graphics technologies.