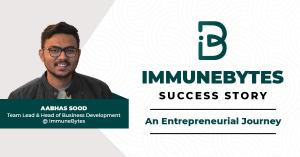 NEW DELHI, DELHI, INDIA, July 21, 2021 /EINPresswire.com/ — Founded in early 2020, ImmuneBytes is an Indian blockchain security firm that leverages best-in-class technology to secure DeFi projects. This is their story – A story of climbing up the ladder from bottom to the top!

2018 was a record-breaking year for crypto in many ways, one of them was the DeFi Exchange hacks reaching their peak. People were in a state of frenzy. However, amidst the hysteria, there’s always this one moment when you realize, “This needs to stop!”. The $40k SpankChain attack, dated Oct 09, 2018, was one such moment for ImmuneBytes’ founder, Aabhas Sood. It sparked the idea of this venture and the journey is on ever since. Securing DeFi, the idea that sprouted ImmuneBytes. A spirited blockchain security firm that is striving to facilitate blockchain security and delivering smart contract audit services around the globe.

“The term "Blockchain" caught my attention in late 2017s when crypto was booming and… that's when it started”, Aabhas explains. “Being a student, I spent my time exploring the technology, and around late 2018s, I enrolled for a Blockchain certification course sponsored by IBM in collaboration with IIT Kharagpur. Fortunately, I got an early chance to work with Blockchain-centric startups and that was the beginning of my entrepreneurial journey! ”, he adds.

ImmuneByte’s business model is centered around providing auditing services to DeFi firms that deal with smart contract creation and execution, developing dApps and DEXs, NFT and stablecoin contracts, and even digital wallets. The use of crisp and present-day tools, along with the company’s structured team provide highly customized services to their clients.

The platform allows organizations and developers involved in blockchain and crypto to come forth and request a security audit for their businesses. ImmuneBytes also deals with penetration testing and security consulting services. However, most of their revenue is generated via audits.

ImmuneBytes’ pricing model is dependable on the complexity of the code, type of contract, the blockchain framework employed, and the timeline. Clients are handed detailed audit reports with the promise of free re-audits. ImmuneBytes has been able to successfully secure more than 1.2 Billion worth of funds.

So far in this journey, ImmuneBytes has worked with 65+ clients on various blockchain frameworks, with clients spread across the globe. Some of them include A-league projects such as Ethernity (~98 M), TrueFi (~56 M), SheeshaFinance (~35 M), Uniqly (~16 M), MahaDAO (~5 M), and others.

The idea of having a blockchain security start-up was put into action during the early 2020s. The core team was already working actively in the blockchain space, providing consultancy services to some of the ICOs, IDOs, IEOs, and STOs. All it took was this one idea to bring them together as dedicated smart contract auditors. Like every other start-up, ImmuneBytes had its fair share of struggles initially.

The biggest hurdle was acquiring resources, especially the ones who are well-versed in Solidity, a comparatively newer language in the market. The team commenced as a consultancy firm for several months before launching as full-fledged smart contract auditors. The founder explained that these initial struggles are what made him and the team push forth even harder.

“A major driving force was the constant hacks and security breaches happening every other week. Hackers were getting more and more creative and were devising new schemes to exploit users and businesses. We had to come up with a solution.”

In no time, ImmuneBytes acquired experienced and skilled auditors, marketing managers, logistic handling representatives, business process managers, and so on. They found professionals who were passionate about blockchain, interns who were eager to learn and so, the team grew, and along with it grew their reach.

“It took us about 3 months to secure our first project. It was a great deal for us, you know. It provided us with much-needed exposure and opened newer doors.”, adds Aabhas. Of course, the pandemic then happened! Amidst the world crisis, however, a silver lining was seen.

Since people were on the lookout for jobs and with the blockchain and crypto industry booming, ImmuneBytes grabbed many opportunities that paved the way further. They were able to capture projects in their early stages and won numerous leads, helping them establish a place in the market and compete with its key players.

On asking about the future plans of action, the founder revealed that they’ve some really cool and interesting concepts that they want to be churning out. They’re happy to be taking risks with the projects that come their way. The team also plans to roll out Bug Bounty programs shortly. Even with an audit, a smart contract is still vulnerable to hacks, that’s one idea the ImmuneBytes’ team is currently focussing on the most. So, Keep an eye out!