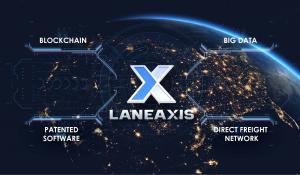 Up to 48,636 shares purchased, probably going for more. I own a small trucking company and I've never wanted to see someone succeed more than LaneAxis.”
— Matthew Parker – Trucking Company Owner

“This is the last major milestone on our way to successfully closing out this round of fundraising,” says Rick Burnett, LaneAxis CEO and Founder. “We continue to be awestruck by the depth and breadth of our supporter community, which comprises both seasoned investors as well as those who will benefit most from the platform: truckers and shipping companies.”

More than 3,900 investors have contributed to the LaneAxis campaign, which is hosted on the StartEngine crowdfunding platform. Another 10,000+ “followers” are also monitoring the company’s progress. In 2020, LaneAxis oversubscribed its Reg CF campaign ahead of schedule – and with hundreds of people left on the waitlist.

LaneAxis has been explicit in stating its primary mission: eliminating expensive and often unscrupulous intermediaries such as freight brokers and third party logistics providers (3PLs) from the shipping equation. These companies have cast a dark shadow over freight shipping for decades. Currently freight broker reform is being debated on Capitol Hill.

The LaneAxis solution represents more than a mere “disruption” of the freight transportation space – it is more akin to a dismantling and complete overhaul. The trucking industry remains mired in antiquated processes such as phone calls, faxes and emails that add layers of chaos rather than the clarity and transparency the industry is starving for.

Ultimately LaneAxis is looking to eliminate roughly $200 billion in “managed fees” that weigh down the supply chain and steer revenue away from small, independent trucking companies. The LaneAxis Direct Network accomplishes this by connecting shippers directly to carriers via its online and mobile enabled platform. This leads to direct and honest negotiations between the parties, as well as automated, real-time shipment management and monitoring.

LaneAxis is further fortifying the system by implementing blockchain technology powered by the AXIS Token to streamline and secure freight movements and critical shipment documents. The AXIS Utility Token serves as an API access key into the blockchain ecosystem, as well as a load-level verification tool for shipment milestones, such as proof-of-pickup and delivery. Third parties (such as insurance companies) can utilize the AXIS Token to obtain valuable industry, company and driver data.

Trucking insiders have been beyond generous with their praise for the paradigm shift LaneAxis is spearheading:

“I'm an independent inventor with issued utility patents from the USPTO. My dad was a newspaperman turned trucker celebrity who authored numerous books about trucking. My husband and I have hauled primarily for shippers in the past [including] Nestle and PepsiCo. Currently we are leaving a hazmat job searching for work, and I have to be honest and say LaneAxis sounds like a dream come true. Connecting shippers directly to carriers is what is desperately needed in the trucking industry. The LaneAxis business model is a great way to eliminate the unnecessary middleman between shippers and carriers. The large trucking companies like JB Hunt, Knight/Swift and Schneider are destroying the industry with their greed.”
-April Cantley

“Up to 48,636 shares purchased, probably going for more. I own a small trucking company and I've never wanted to see someone succeed more than LaneAxis.”
-Matthew Parker

“I used to work as a General Commodities dispatcher (Third party Logistics Provider). I immediately love the concept and genuinely see this as the natural progression of the industry. I once had a truck driver deadhead from Miami to Pensacola, just to get a load out of Florida…. I’ll let you do the math.”
-Jimmy Mansfield

The LaneAxis Direct Network is already live in the market and profitable. Thousands of carriers and hundreds of shippers have joined the network. LaneAxis is currently conducting a pilot program with in-network carriers and shippers to test the blockchain and token functionality before fully integrating it into its patented core SaaS platform.