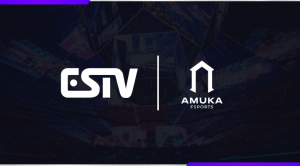 We are so excited to be able to work with an amazing content platform like ESTV to bring new voices into the Esports landscape”
— Ben Feferman, CEO of Amuka Esports

TORONTO, ON, CANADA, July 23, 2021 /EINPresswire.com/ — Amuka Esports, a multi-channel Esports organization, is pleased to announce they have signed a new global content distribution deal with Los Angeles-based ESTV, to deliver a new slate of Esports content created by some of Canada’s best.

ESTV is the first 24/7 live linear and AVOD Esports channel available across the globe. They currently have content deals with NFL Alumni, Dept. of Defense Joint Base Lewis McChord Warrior Zone Esports, and International Esports Federation among many others.

Amuka Esports will be bringing their catalogue of 200+ hours of Esports content and four regular shows including The ReFrag, From the War Room, Bestof3 and Esports Unfiltered. There will also be a dedicated page for Parabellum Esports, with regular content coming from their content team and pro rosters.

“Over the past two years we have been developing a vast library of Esports content created by a diverse group of Canadian players and content creators. We are so excited to be able to work with an amazing content platform like ESTV to bring new voices into the Esports landscape,” according to Ben Feferman, CEO of Amuka Esports.

ESTV has been quickly scaling its distribution partners which now include Samsung TV Plus, Roku Live TV Channel, Amazon’s FireTv, Rakuten, TCL and VIZIO. To date, they have almost 30M unique viewers from over 40 countries around the world.

“We are excited to begin working with Amuka Esports and look forward to this opportunity for ESTV to further its business across Canada. The slate of new programming will infuse our current library with more diversity and inclusion, something we and our audience values,” according to Eric Yoon, Founder and CEO of ESTV.

You can check out the full library at www.estv.co with new programming being added every week.

About Amuka Esports
Amuka Esports is a diversified Esports company focusing on teams, tournaments, content, and venues. We create localized hubs in cities across North America, each consisting of a venue, tournament organizer, content team, merchandise brands, and incubator. Amuka also operates Canada’s largest Esports venue along with several teams based in North America and Europe. Learn more about our impact on the North American Esports scene at our official website and on our Twitter, Instagram, and Facebook.